Evaluating the resilience of deepwater systems to recover from oil spills

The Deepwater Horizon (DWH) disaster of April 20th, 2010, is recognised as the worst accidental maritime oil spill in the United States. An estimated 4.1 million barrels (0.7 million tonnes) of crude oil and 170,000 tonnes of natural gas were released into the Gulf of Mexico over a period of 84 days. The spill was unprecedented by virtue of the depth at which it occurred and formation of a deepwater oil plume that became entrained at ~1000-1300 m within the water column and which spanned an impressive 35 x 2 x 0.2 km.

With oil exploration moving further into deeper waters (>1000m), this raises concern because of the unpredictability and current lack of experience and know-how in dealing with a deep-sea spill. Whilst the DWH oil spill taught us a lot, it also highlighted the extent of our ignorance and the need to better understand oil behaviour in the deep sea, its effect on natural systems, and the importance to improve deep-sea oil-spill response contingency planning.

The increasing threat of oil pollution in the NE Atlantic and surrounding waterways has created interest in understanding the complexity and dynamics of microbial communities in this region, particularly those capable of degrading oil hydrocarbons. Since the fate of oil in the environment is largely dictated by the presence and activities of oil-degrading bacteria, these organisms are a major focus of our lab. This project focuses on exploring the structure, abundance and diversity of microbial communities present in the Faroe-Shetland Channel (FSC) – a region where oil exploration is expanding. The project objectives are: 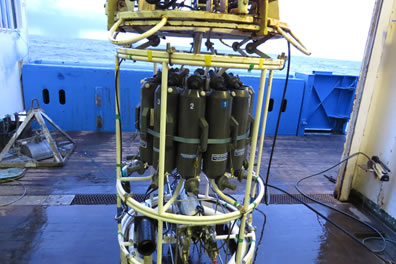 Figure 1. Rosette sampler with 12 Niskin bottles used for sampling the water column at different depths in the FSC. 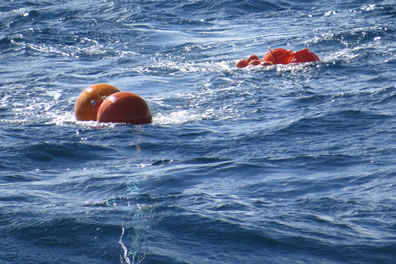 Figure 2. Deployment of a water column in-situ experiment to study the microbial response to crude oil in the FSC.

Figure 3. Schematic showing an overview of the DNA-SIP method.

The findings of this study are expected to provide a better estimation of the impact an oil spill could have on the FSC microbial communities, as well as the potential of the environment to respond to and recover from a major oil spill. We are working with modellers to help integrate our data into models that account for biological controls influencing the fate of oil in marine environments, and in-turn feed into optimising bioremediation/oil-spill response contingency plans. 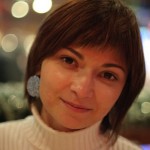 Angelina Angelova is a PhD student working on this project, which is in collaboration with Marine Scotland Science.  Modern day molecular biology techniques such as barcode-amplicon MiSeq sequencing and DNA-based stable isotope probing (DNA-SIP) are being used to provide new information on the potential of oil-degrading communities in the FSC to respond to and utilize crude oil hydrocarbons. A collection of bacterial strains from the FSC that are capable of breaking down oil hydrocarbons is being created for taxonomic and genome analyses to better understand their ecology. The project is funded by a James-Watt Scholarship to Angelina and is in collaboration with the University of Georgia in Athens, USA, and with Marine Scotland Science in Aberdeen.