Marine microbes in a changing ocean 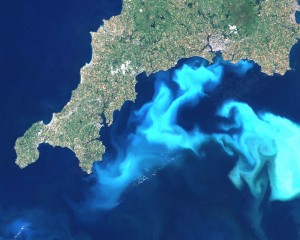 Phytoplankton in the global ocean contribute significantly to life on Earth by performing approximately half of global carbon fixation and producing almost half of the oxygen in our atmosphere. These organisms are essentially micro-algae, which are microscopic plants – the so-called ‘rainforests’ of the sea – that can bloom in the ocean with such intensity that they can be seen by satellites from space (Figure 1). Phytoplankton have evolved an intricate co–existence with bacteria, which primarily occurs on the cell surface (i.e. phycosphere) of phytoplankton cells and which is believed to play importantly to their ecological success. 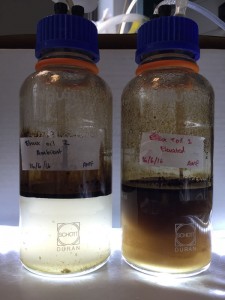 Oil-degrading bacteria play a crucial role in the breakdown of hydrocarbons in marine environments. Recent evidence has shown that phytoplankton, constituting members across the three major lineages (dinoflagellates, diatoms, coccolithophores), harbour communities of associated oil-degrading bacteria. The association of these bacteria with phytoplankton raises important questions with respect to their evolutionary genesis, ecology and response during a marine oil spill.

Projected increases in atmospheric carbon dioxide (CO2) are expected to cause an increase in sea temperatures and reduce seawater pH. With on-going oil and gas exploration expanding into higher latitudes, it is critically important that we understand any increased risk of climate change impacts upon oil-degrading microbes and phytoplanlton in the global ocean. One way of studying this is to conduct temperature and CO2 controlled experiments (Figure 2) with laboratory cultures and natural populations of phytoplankton and analyse their response and the fate of crude oil under future climate change conditions. 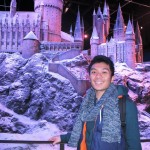 Afiq Mohd Fahmi is a PhD student in the Gutierrez Lab who is investigating the effects of future climate change conditions (ocean acidification and warming) on the activities of phytoplankton and oil-degrading bacteria, including their resilience and ability to respond in the event of an oil spill in a changing ocean. State-of-the-art gas mixing and culturing facilities, as well as sophisticated microbial and molecular techniques (FISH, MiSeq sequencing, DNA-SIP) are being used. The project is funded by Universiti Malaysia Terengganu and is in collaboration with the University of Edinburgh.