Thraustochytrids are osmotrophic protists widely spread around the world in seawater. The image above shows thraustochytrid cells localised and feeding on the surface of three pollen grains. For a long time thraustochytrids were classified as fungi and largely ignored by the scientific world. Recently, these somewhat enigmatic microorganisms have attracted increasing interest due to their potential for use in a large range of biotechnological applications. 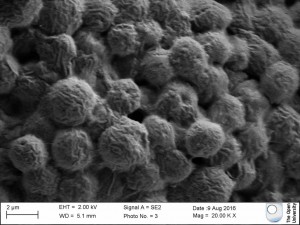 One of the best-known of these is their ability to produce and accumulate large quantities of polyunsaturated fatty acids, in particular omega-3s, of which a high percentage is docosahexanoic acid (DHA). As a result, there is intensified interest expressed by the food and petroleum industries in the potential exploitation of thraustochytrids for producing bio-ingredients or oil additives for biodiesel.

In addition, thraustochytrids are known to produce a large range of enzymes with, for example, cellulosic or alkaline lipase activity, which may be of commercial interest to bioethanol, detergent and pharmaceutical manufacturers. They are also recognised for producing a wide range of other biomolecules with high economic value, such as carotenoids (pigments).

Currently, the production of omega-3 rich oils for human and animal diets relies primarily on wild-harvested fishes and other marine animals such as krill. With global fishing capacity reaching its maximum levels in the early 1990s, aquaculture has overtaken the traditional wild-harvest fishing industry to meet the demand for fish and has become the fastest growing animal-food producing sector. Hence, the supply of wildfish, and therefore omega-3 oils, is becoming tighter, emphasing the need for alternate, renewable and sustainable sources of DHA. To meet this demand, the potential of thraustochytrids as DHA producers is recognized and widely explored. However, most of the research on DHA production from thraustochytrids so far has been performed with sub-tropical strains, many of which had been isolated from Malaysian, Japanese and Chinese coastal waters, as well as cool temperate waters such as southern Australia. 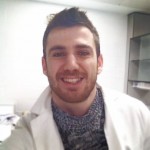 Loris Fossier, a PhD student in the Gutierrez Lab, is investigating oil composition and content of thraustochytrids. The project is partially supported by a James-Watt Scholarship to Loris. The collaboration team includes Drs Polglase and Mitchell (HWU) and Drs. Nichols and Chang (CSIRO in Tasmania, Australia).

FacebookTwitterLinkedInRedditTumblrPinterestVkEmail
We use cookies to ensure that we give you the best experience on our website. If you continue to use this site we will assume that you are happy with it.Ok