RealRiskNano: nanoplastics in the marine environment 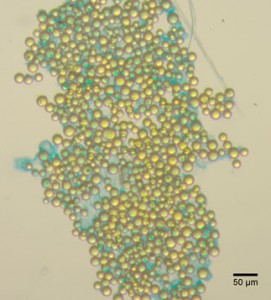 Figure 1. Light micrograph of nano-scale plastic particles aggregated in seawater due to the ‘stickiness’ of EPS. Photo by Steve Summers.

Contamination of the marine environment by plastic debris is a visually obvious and undesirable consequence of the exponential increase in production and use of plastics in consumer products over the last 50 years.

Globally, more than 200 million tonnes of plastic is produced annually, of which approximately 4.8 – 12.7M tonnes enters the ocean on any given year. Evidence indicates that nanoplastics are likely to be the most abundant plastic particles present in marine environments. There is evidence that large and micro-size plastics can break into fragments that include nanoplastics, and the persistence of plastics in the environment indicates that there is considerable opportunity for aging and weathering (including exposure to UV light) to enhance fragmentation. Critical assessments of nanotoxicology research continue to recognise the unusual properties of nanoplastics and their toxicological importance, collectively of which remains in a nascent state of understanding.

Further to the possible interactions of toxic chemicals with nanoplastics, nano-scale particles will likely interact and associate with microorganisms under environmentally relevant conditions. Microorganisms in the water column can produce extracellular polymer substances (EPS) that stick to surfaces of plastics and cause them to adhere together (Figure 1), and provide a niche for the entrainment of microbial communities. Complexes of microorganisms and particles with EPS may be considerably more environmentally relevant than ‘clean’ or ‘pristine’ nanoplastic particles. 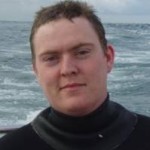 Dr. Stephen Summers is a Postdoc Fellow in the Gutierrez Lab who is currently working on the RealRiskNano project (https://epaquatic.org/realrisknano/). This NERC-funded project, which is in collaboration with Plymouth University, aims to establish and clarify the risks that nanometer-scale plastic debris could potentially effect in an aquatic environment. Several sophisticated molecular ecology techniques are being used, such as Fluorescent in-situ Hybridisation (FISH), flow cytometry and barcoded-amplicon MiSeq sequencing to investigate how seawater microbial communities respond and behave to nano-particles of plastic and if this has any subsequent ecotoxicological effect(s) on higher organisms. Dr. Summers can be contacted at S.Summers@hw.ac.uk